Each summer, at the end of August, Baltic Private Equity & Venture Capital professionals gather at one the beautiful Baltic resorts to discuss industry developments, network & enjoy various activities together. EstVCA has the pleasure of inviting you to the 8th edition of Baltic VCA Summit.

Baltic VCA Summit will be held on 21-22 August in Pärnu – a resort town known for its 19th-century timber villas and for sandy Pärnu Beach, with its shallow waters, and promenades.

The main event will be held on 21 August at the iconic Pärnu Beach Hotel. On 22 August Baltic VCA Summit will continue with a series of activities and will reach its finale at Pärnu Rowing Club with a thrilling race where VCs go up against Buyout.

Did you know that
IT IS ACCEPTABLE TO NAP ON THE JOB IN JAPAN? IT’S VIEWeD AS EVIDENCE OF WORKING VERY HARD.

To keep the official part lively and entertaining, and to broaden the prospective of the audience, we add a specific country touch each year (previously Israel, India, Columbia, Netherlands).

This year the moderator will take the audience on a journey to Japan.

Insights into Japanese business and culture will continue throughout the day and evening programme.

Jerry Yang is General Partner at Hardware Club, a Paris-Silicon Valley-Tokyo based VC firm whose fund LPs include  Foxconn, Taizo Son’s Mistletoe, NGK Sparkplug, Digital Garage, Isomer Capital, Draper Esprit etc. And as a name suggests – it invests in hardware startups. Before switching to the dark side, Jerry had been in analog IC design for more than a decade.

Originally from Taiwan, Jerry's career has spanned across many continents and cultures. At a young age he won a large contract with Japanese electronics part manufacturer ROHM, which in turn it allowed him to exit his startup. Since then he has established a very strong connection with Japan and is closely familiar with Japanese corporate culture. He is also fluent in Japanese and is a routine speaker at VC and tech events, including Tech in Asia and SLUSH Tokyo.

Jerry has obtained a BS and MS degrees in electrical engineering from the National Taiwan University and MBA degree from HEC Paris.

Chris is a Cofounder and Partner at Isomer Capital. He is on the  board of  technology companies Calastone, Machines with Vison and in 2016 Magic Pony Technologies that was acquired by Twitter. He was one the original advisors and Venture Partners at Entrepreneur First. Chris was the founding director of the Venture Capital Unit for the UK Government where he promoted the UK VC and direct investment opportunities to investors in the US and Asia and attracted over $1B, he also advised the Singaporean Government on European VC’s. In 1998 he co-founded CPS a mobile location tech company which he successfully sold in 2007 to a major global chip design company. Prior to his start up experience he had over 15 years operational experience at US based DSc which he assisted in the $4B sale to Alcatel and Northern Telecom where he worked in Turkey and the US. He has a BSc in Physics and Chemistry from Leeds University under an industrial scholarship program

Jesper Knutssøn is partner and co-founder of Saga Private Equity. He has 28 years of experience in private equity and investment banking. At Saga Privat Equity he is responsible for investor relations and he has been involved in several due diligence processes. Previously, Jesper was responsible for investor relations at Danske Private Equity from 2006-2017. Before entering the private equity industry in 2006, he worked at Ixis Securities (Natixis) and Svenska Handelsbanken France. Mr. Knutssøn holds a M. Sc. (Economics) from the University of Copenhagen.

Tesi is a Finnish state-owned investment company that accelerates growth companies’ success stories by investing in them, both directly and via funds. Tesi is a major player in the Finnish private equity market with AUM of €1.3bn. Tesi invests in all sectors on equal terms and always together with private investors. The mission of Tesi is to develop Finnish venture capital and private equity market as well as to promote economic and business growth in Finland.

<
>
Close
Tadas Gudaitis
CEO at Swedbank Asset Management, Vilnius
Tadas Gudaitis
CEO at Swedbank Asset Management, Vilnius
Tadas has 15+ years of experience in life insurance and asset management area and currently leading the largest pension funds’ management company in Lithuania. He is member of the Management Board at Lithuanian Private Equity and Venture Capital Association and Review Board Member at Baltic Financial Advisors Association. In 2010 he defended PhD thesis in Economics at Vilnius University.
<
>
Close
Ralph Guenther
Partner at Pantheon, London
Ralph Guenther
Partner at Pantheon, London
Ralph is a member of Pantheon’s European Investor Relations team, focusing on Germany, Austria and Switzerland, and will also source deals for Pantheon’s secondaries team. Ralph was previously a Managing Director with bmp AG where he worked on private equity fund-of-funds and advisory services for institutional clients. He has a degree in economics from FU Berlin.
Pantheon is one of the largest Private Equity houses in the world offering primary, secondary and co-investment strategies across private equity, infrastructure and real assets. Headquartered in London and with offices in New York, San Francisco, Hong Kong, Seoul, Bogotá and Dublin. Pantheon's AUM is 43,5bn USD.
<
>
Close
Kristjan Kalda
Partner at BaltCap, Tallinn
Kristjan Kalda
Partner at BaltCap, Tallinn
Kristjan is a Chariman of the Estonian Private Equity & Venture Capital Association and a founding partner at BaltCap - the largest private equity house in the Baltics. Kristjan specialises in buyouts and has lead a number of companies to successful exits: Fitek, Magnetic MRO, TREV-2, Energate, Tuuleenergia, Microlink, A. le Coq, to name a few.

Kriss is a senior investment manager in EIF’s earlystage VC and BA fund-of-funds practice, former business angel, entrepreneur and management consultant. Kriss has a "hands-on" experience in co-founding and developing businesses in product and service sectors, advisory work, as well as investing himself as a business angel. Kriss holds an MBA degree from INSEAD (Singapore, France).

<
>
Close
Pavel Dvorak
Principal Banker at EBRD, London
Pavel Dvorak
Principal Banker at EBRD, London
Pavel Dvorak is a Principal Banker at the EBRD where he focuses on investments in venture capital and private equity funds across the EBRD region. He also leads policy and technical assistance initiatives to support innovation and the development of the venture capital ecosystem in the EBRD region. Pavel supported the development and implementation of the EBRD's EUR 200 million direct venture capital investment platform and the EUR 100 million Early-Stage Innovation Facility, a captive early-stage VC fund-of-funds. He previously focused on supporting direct investments in ICT, healthcare and pharma, as well as developing the EBRD’s approaches to supporting innovation in the EBRD region (including both investments and policy). In his previous role of a Principal Economist at the EBRD, Pavel worked on developing country and sector strategies, targeted policy initiatives, and impact assessment. Before joining the EBRD, Pavel was a management consultant at Deloitte, where he focused mainly on commercial due diligence for private equity investors, strategy development and operations excellence in a number of sectors in CEE. Pavel holds a Ph.D. in Economics from CERGE-EI, Charles University in Prague and is a Chartered Financial Analyst (CFA) and a Chartered Alternative Investment Analyst (CAIA).

Those who enjoy getting up really early can join Karma Ventures team for a 10k karma run and explore the city of Pärnu.

Tennis lovers can join for a small tournament at the Pärnu City Tennis Club.

Those into golf can enjoy one of the finest courses in Northern Europe - Pärnu Bay Golf Links.

The city of Pärnu is strongly associated with its surrounding water, both the Baltic Sea and Pärnu River. Next to this, rowing is the most prominent sport and has brought the city of Pärnu many Olympic medals and international fame.

At 13:00 we will gather at Pärnu Rowing Club for a barbecue by the one and only Enn Tobreluts, followed by cocktails and a lots of entertainment. Those interested, can try rowing on Pärnu river with instructors.

Baltic VCA summit will be concluded by a thrilling boat race where VC-s, Buyout, LP-s and service providers will go up against each other in a boats designed for 8 rowers. You can think of it as a Harvard-Yale Regatta but for Baltic PE & VC professionals.

EVENT IS SOLD OUT.

Complimentary
* To apply for a complimentary pass please contact kristiina@estvca.ee

We have pre-bookings until July in the following hotels. Ask for a discount with the codeword “VCSummit”

For booking send email to:
info@rannahotell.ee

For booking send email to:
resorthotel@spaestonia.ee

For booking send email to:
info@wasa.ee

For booking send email to:
sale@ammende.ee 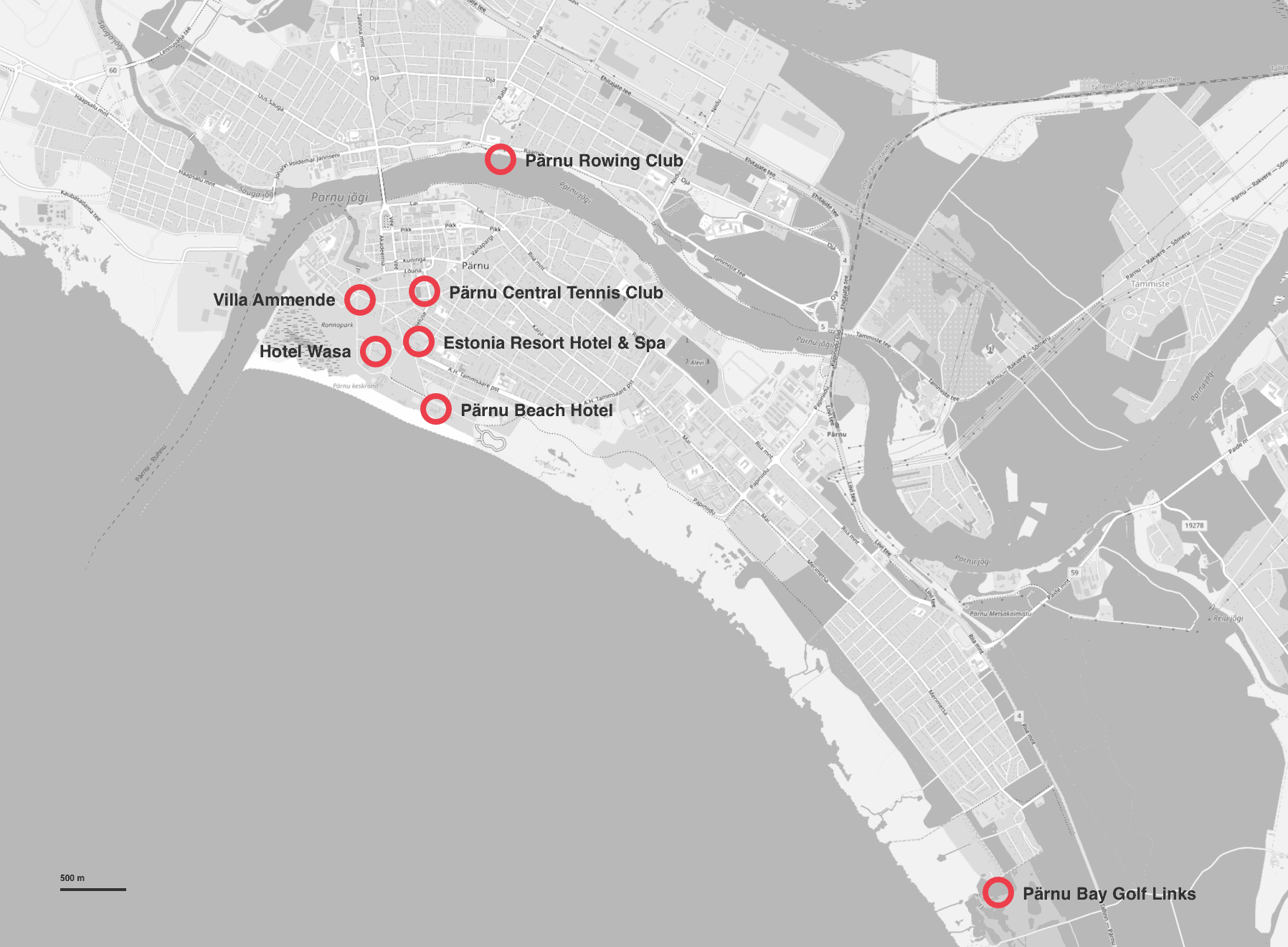