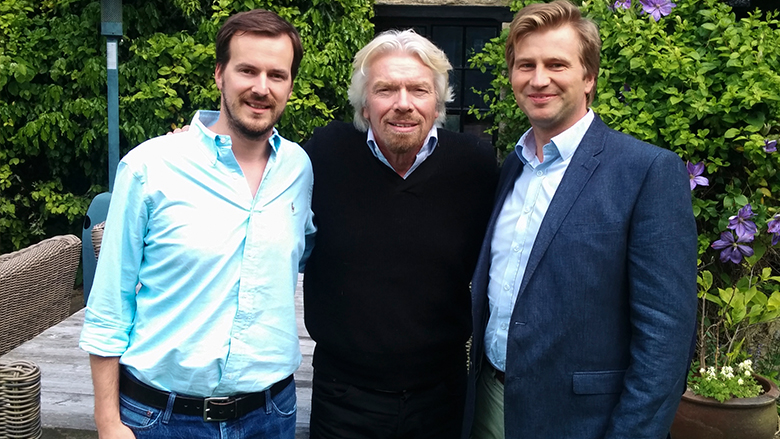 The London-based company with Estonian Skype roots has closed a new round of funding. It’s raised a further $25 million, adding Sir Richard Branson as a backer, along with existing investors, including Peter Thiel’s Valar Ventures, IA Ventures, Index Ventures, TAG (Robin Klein and Saul Klein), and Kima Ventures. This brings the total raised by TransferWise to $33 million since its launch in early 2011.

A couple of months back, European money transfer startup TransferWise hit a major (PR) milestone. Its platform had processed £1 billion of customers’ money, an eight-fold increase from the previous year. At the time, Executive Chairman and co-founder Taavet Hinrikus sounded as bullish as ever.

“If I look at the world right now… money transfer is such a humongous market,” he told me during a call. “Even though we have transferred a billion pounds so far, we’re just touching the beginning of it.”

Today, Hinrikus’ words are brought sharply into focus. The London-based company has closed a new round of funding. It’s raised a further $25 million, adding Sir Richard Branson as a backer, along with existing investors, including Peter Thiel’s Valar Ventures, IA Ventures, Index Ventures, TAG (Robin Klein and Saul Klein), and Kima Ventures. This brings the total raised by TransferWise to $33 million since its launch in early 2011.

When those reports first surfaced, Hinrikus refused to be drawn into speculation regarding the über-social network, except to say, if true, it validated the need to bring greater transparency to financial services and in particular the hidden fees charged by banks when transferring money from one currency/country to another.

“If someone as big as Facebook comes into the space, then I think that’s only going to be beneficial to everyone,” he said, in typical ‘we welcome competition’ startup speak. When asked today whether or not TransferWise are still in talks or working with Facebook in some way, Hinrikus offered “no comment”.

But, with fresh and substantial capital in the bank, his insistence TransferWise is in it for the long haul, seems as genuine as ever. Or, more cynically, the startup’s potential price tag just went up a notch.

He also tells me the company could break even today if it chose to, but he thinks that would be a mistake steeped in short-term thinking and instead is gunning for further growth. TransferWise grew 10x in the last year.

So, what’s a feisty fintech and revenue-generating startup to do with new finance? In TransferWise’s case, it says it plans to continue to expand, including head count, and embark on an aggressive marketing spree, making specific reference to its self-proclaimed “cheeky” advertising campaign that recently set out to expose the big bad banks.

Cheeky, perhaps? It certainly fell foul of the UK’s Advertising Standards Authority, which may not be quite what TransferWise had in mind. However, according to Hinrikus, the fact that even the ASA doesn’t seem to understand the way money transfers incur hidden charges underlines the overall problem.

To that end, Hinrikus says in a statement: “We’re going to use this money to lead the charge against hidden bank fees and expose the problem to a wider audience. It’s outrageous that they can get away with advertising that claims their transfers are ‘fee-free’ despite often taking up to 5% of the money sent through the exchange rate.“

That’s another reference to TransferWise’s modus operandi. By employing a P2P model, the startup is able to undercut the banks and other legacy competitors when sending money abroad, while at the same time exposing the lack of pricing transparency across the industry.

Typically, incumbent players, such as the banks or Western Union, encourage consumers to compare money transfer fees without being made aware of the mark-up added to the exchange rate offered. TransferWise wants to change this.

Continuing that theme, the company has put together a Pinterest “Board of Shame” featuring its competitors’ advertising. I’ll say no more…